Josh – CUTTING HOLES IN MY BOAT!

So I’ve been slowly digging away at the plywood that acts as the cabins roof. Every time I take a little more out I feel like it just means that much more work and structural integrity lost. 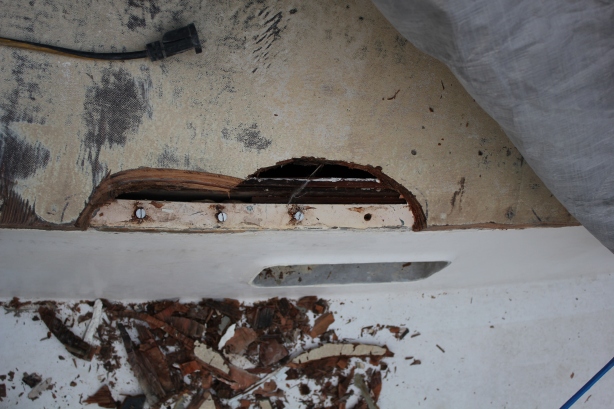 I asked a friend of ours to take a look, He has been a house inspector and done work on his own boat as well. I wanted a real opinion, He said “when in doubt, cut it out” we talked it all over a while and went back and forth on all my thoughts. He very patiently waited until I had finished spilling everything then told me that if it needs to go then just get rid of it. No reason to take so long in slowly going in. If it needs structural bracing then it needs it, just build it back into it while I’m putting it all together. It was a push that was good to get. I have been going back and forth on how far to cut in and that I still want to do it correctly but don’t want to lose the structural integrity that is needed. He is right though, so I cut a hole that encased the entire area that is in question.

I hoped it would reveal nice dry wood I would be able to work with… NO! It is still almost to the point of dripping in some places, the thing I’m seeing now though is that it all looks to be very solid just soaked in water at this point. I don’t see any de-lamination what so ever.

Can see the wet spots along the fresh cut edge

I’m going to let it sit overnight with a small space heater/fan in the cabin to see how it dries then tackle it tomorrow. I’m hoping it will dry nicely and I will be able to begin cutting it for scarfing the new pieces on. Another problem that I haven’t quite figured out yet, there are bolts holding the cabin roof down every four inches that are held in place by a receiving nut. I’m not able to reach the nut because there is wood structure on the cabin interior sides that I don’t really want to attempt to dismantle, I don’t feel that it would come off nicely to replace. So at this point it looks like I’ll probably be cutting the bolts out then trying to figure out another fastener to use. As of right now all I can think of is using an epoxy or something like 5200, an adhesive meant to never come off. I’m hoping to figure out a mechanical fastener to use if possible. I’ve located a total of three spots and it looks like only one is very extensive so far. 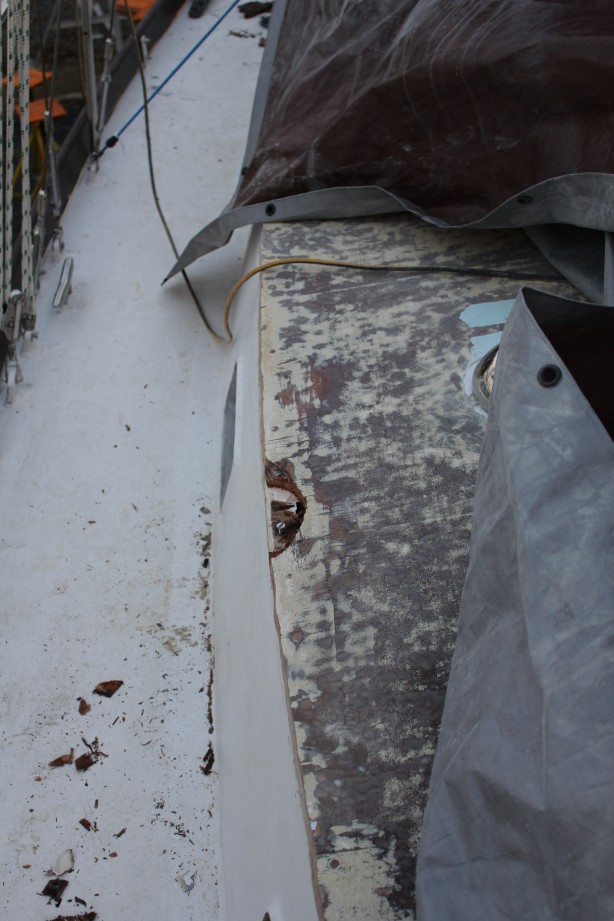 I’ll dig into them a bit more once I feel confident that the big one is in a place that will work. If I feel structural support will be required the couple thoughts I’ve come up with are to possibly laminate an extra layer of plywood under and/or over the entire area, that would allow for a platform at the base of the mast for a person to work all the halyards and winches that conveniently are right above the hole.  Another thought was to run a couple supporting pieces across the bottom then use them as some sort of useful structure.

Shea looking at the large hole I cut, see the entry way to the V birth

Maybe some place to hold charts, problem with that would be that it’s kinda in a passage way, I already can’t stand up perfectly straight inside, I would probably hit my head all the time if I put something in there that hung down.

Josh – Work on the cabin top

I’ve been working on the cabin top since we arrived here just about and I finally know how I’m going to go about fixing it. So far I’ve cleaned out most of the rotten wood I could find and tore off the trim pieces that seemed to play a major roll in the moisture seepage. Shea and I have also spent some time scraping the old paint off, though we still have a lot to go before I think it will be ready to begin the rebuild portion.

After talking with the yard boss about it and getting some ideas going I’ve finally settled on cleaning the entire top of everything including the vents, hatches, and paint. Once everything is cleaned off I’m going to laminate some new plywood in place of what needs to be removed then fiberglass the entire top and rap it down to the steel cabin sides. Once all that is finished nicely, I plan to wrap the entire thing with teak so the fiberglass won’t peel or allow water to come back up behind it. I plan to get some pictures of the project and keep things updated along the process.

Returning from one of my deployments a friend of mine suggested we go skydiving in Hawaii, having always wanted to do that I eagerly agreed to go! The feeling of it all was exactly what I had been searching for.

Whenever I approach the edge of a high  up place I always have an urge to fly off. It’s not the jump or the ground that calls to me it’s the part about being completely free of everything and just soaring above that I yearn for.

I decided that day in Hawaii that I would get certified and continue to jump. It really is an un-describable feeling that comes over me and it never went away. It took a few years but here I am. I had been thinking all summer of just doing the classes but had found one stupid reason after another not to go. I finally made up my mind and figured I would do another Tandem jump just to make sure it was everything I remember it being. Needless to say I called that Wednesday afternoon after my jump extremely excited to be reserving my spot in the next Advance Free Fall class that was being offered.

That Saturday I showed up early bright eyed and bushy tailed, I filled out the paperwork and then waited with a few of the other perspective jumpers. We became friends and continued to feed on each others excitement. Even after the five hour class we were all still raring to go. I couldn’t believe how fast it had come, I was standing in the door of the plane with an instructor on either side of me. My own shoot strapped on and wind blowing it was truly an exciting experience! One step out and I was flying again, not forgetting my instructions I went through the pre-rehearsed routine then took ques from my instructors in proper falling techniques up until I waved them off and pulled my pilot chute (ripcord). The parachute opened with a rush pulling what felt like upward as my instructors fell away. I had an ear to ear grin as I took hold of the steering toggles and began to fly toward my holding area. Once in place over the mark I began doing loops learning and having fun as I slowly floated towards the ground. Once my turn came up I began my landing turns as we had talked about in class and listened to the voice over the radio that was strapped to my chest. I cornered as instructed and pulled on my brakes as right before I set down, I had hoped to have a graceful landing on my feet though my first landing was not to be so. The chute continued to move forward as I had pulled my brakes just to late and I let my feet slip forward as I went for a short ride on my rear end. That wasn’t enough to wipe the grin off my face though. I wore it back and talked over the jump then decided that there was still time for another!

I have made a total of seven jumps so far after that class, earning the ability to jump without an instructor by my side though I still need to be checked out prior to my jumps and need to pass more jumps to receive my license. I’m well on my way and looking forward to getting it!

After that I plan on continuing my jumps so I can then learn to use the wingsuit and learn to B.A.S.E. jump. I would love to jump all over the world when the opportunity comes.

For an update of Posts